After Ted Cruz bipartisanly agreed with AOC, she responds with an accusation of attempted murder.

This past week the internet and Twitter has been on fire after third party “trading applications” stifled American traders.

AOC made this tweet, which said, “This is unacceptable. We now need to know more about @RobinhoodApp’s decision to block retail investors from purchasing stock while hedge funds are freely able to trade the stock as they see fit. As a member of the Financial Services Cmte, I’d support a hearing if necessary.” 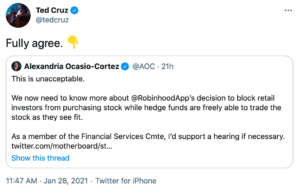 This response could’ve been a moment of much-needed unity and bipartisan collaboration but instead, AOC took it to another level.

AOC’s response read, “I am happy to work with Republicans on this issue where there’s common ground, but you almost had me murdered 3 weeks ago so you can sit this one out. Happy to work w/ almost any other GOP that aren’t trying to get me killed. In the meantime if you want to help, you can resign.”

AOC continued in the Twitter thread and said, “While you conveniently talk about “moving on,” a second Capitol police officer lost their life yesterday in the still-raging aftermath of the attacks you had a role in. This isn’t a joke. We need accountability, and that includes a new Senator from Texas.” 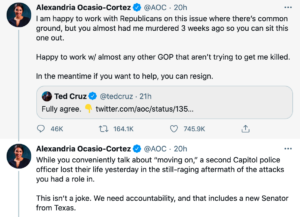 However, the inflammatory young congresswoman made this comment and in no way was censored, fact-checked, or reprimanded in any such way.

Over the past few months, members of the GOP have been censored and even removed from Twitter for making claims half as reckless as AOC’s.

AOC is referring to the riots that took place in the Capitol building on January the 6th.

In no such way did Senator Ted Cruz attempt to murder AOC or any other Congressmen.

Those who stormed the Capitol were swiftly condemned by GOP members, including Cruz and the United States President.

Senator Cruz supported a peaceful protest, which called for another look at the ballot counts and electors of the 2020 presidential election.

While a small branch of that protest ended up storming the Capitol, there is no proof there was no intention before the rally to enter the Capitol building.

Any prior planning insurrection to enter the Capitol was never endorsed or encouraged by any GOP lawmakers.

AOC’s accusations against Cruz show a stark contrast between how the media handles conservative voices and the left’s voices.

Rep. of Texas Chip Roy sent a letter to House Speaker Nancy Pelosi asking her to apologize for AOC’s tweet. If Pelosi does not condemn the tweet, Roy said, “(we) will be forced to find alternative means to condemn this regrettable statement.”

Many lawmakers are now pointing out the double standard in how big tech censors the left and how the media skimmed over reports of leftist riots such as Antifa.

The left has yet again missed a perfect opportunity to unite under a bipartisan platform and instead used it to divide and instigate.

It is unlikely that AOC will receive anything more than a slap on the wrist for these comments, but her tweet has provided the perfect argument to what a double standard looks like.

Did Cuomo Cover Up His Death Toll?

Why The White House Is SILENT About Wall Street…