Biden To Fund Other Countries Abortions

Biden intends to rescind Trump’s policy that prevents foreign non-governmental organizations from receiving U.S. funding if abortion is practiced as a way to “family plan.”

The policy is known as the “Mexico City Policy,” was created by President Ronald Reagan back in 1985 and is often repealed and reinstated by presidents depending on their party lines.

The White House released a statement that said, “The memorandum reflects the policy of the Biden-Harris Administration to support women’s and girls’ sexual and reproductive health and rights in the United States, as well as globally.”

Trump reinstated this policy almost four years to the date from the Bush Administration.

The policy clearly states that U.S. funding does not go to foreign NGOs that promote or perform an abortion. Exceptions of government funding did go this if the abortion was a case of rape, incest, or need to save the mother’s life.

The policy’s goal was that tax-payer dollars would not go to agencies outside of our country that instigates relying on abortion for “family planning.”

A poll conducted by the Knights of Colombus and Marist displayed 58% of Americans oppose or strongly oppose tax-payers paying for abortion. 65% of that included independents and 31% of democrats.

The poll also included an overseas abortion funding question, and the results are incredibly telling.

While the American people may want something else, the Biden administration announced their goals and said they intend to “protect and expand access to comprehensive reproductive health care.”

The U.S. government is known to give aid to foreign countries; however, assistance for abortions is often criticized.

This announcement comes right after the highly debated funding bill when researchers found the U.S. intended to fund Pakistani gender studies with millions of tax-payer dollars.

Tax-payers could ethically justify funding countries for democracy, humanitarian aid, and even partial health care needs, but abortion is quite the stretch.

The debate on abortion is still hotly debated in the U.S. and is far from over. 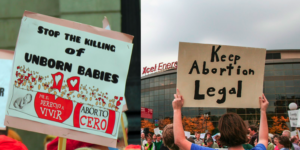 Many conservatives and independents argue abortion is criminal, while leftists argue it is a fundamental right to health care.

If the abortion debate is far from settled in the United States, it would be hard for many Americans to see our government implement these policies not just in our country but globally.

John Kerry Is No Greta Thunberg

Hunter Biden is STILL A Problem