The official press release of the “Office of the Former President” follows below. 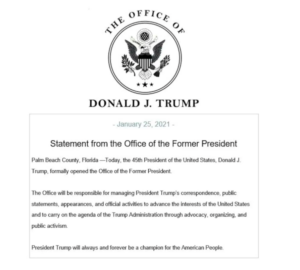 The statement read, “The office will be responsible for managing President Trump’s correspondence, public statements, appearances, and official activities to advance the interests of the United States and to carry on the agenda of the Trump administration through advocacy, organizing, and public activism.”

This announcement came this past Monday, and the Office of the Former President looks to be based out of Palm Beach County, Florida.

With the former President’s Twitter ban and his absence in the White House, this move should be of no surprise to the American people.

It seems that Trump will now use this platform to reach his base and create official statements about how he intends to tackle future issues.

This move is nothing new as President Joe Biden created a similar office before his swearing-in as President, entitled the “Office of the Presidential Elect.” Both offices are technically unofficial by government standards but generate a place where President Trump might be able to further his agenda in the private sector.

We anticipate little to no backlash about this move from the left because President Joe Biden did the same thing just weeks prior.

Donald J. Trump has yet to announce the entirety of his post-presidential plans but has said, “we will see you soon” and “we will be back in some form” in his last remarks before leaving Washington DC just days ago.

Most officials and press outlets are under the assumption that the former President’s time in the spotlight is far from over.

With this new office, former President Trump has the means of connecting with the public during his upcoming impeachment trial and taking jabs at the new administration. A new era of Donald John Trump has just begun.