Donald Trump’s secretary of State, Mike Pompeo, has announced that he will be joining the “Hudson Institute.”

Pompeo, who left the Trump administration just last week, will be joining the conservative think tank based in Washington, D.C.

Mike Pompeo released a statement that said, “I am pleased to be joining Hudson Institute and look forward to contributing to its mission of promoting American leadership and global engagement.”

The former secretary of State served as the CIA director before being picked to replace Rex Tillerson.

During Mike Pompeo’s time as the secretary of State, he acquired much praise for his work defending religious freedom, human rights, pushing back against China, Iran, Russia, and even North Korea. 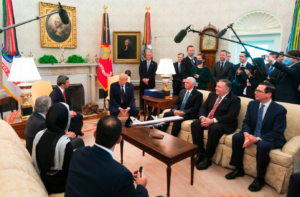 Pompeo also played a crucial role in the Abraham Accords, which has brought revolutionary peace to the Middle-East regions that previously was unheard of.

John Walters, CEO and president of the Hudson Institute released a statement that said, “From his leadership in promoting peace between Israel and its Arab neighbors to confronting strategic threats to the United States, Secretary Pompeo has been among the most consequential secretaries of State … It is an honor to have this outstanding public servant join Hudson Institute.”

The Senate recently confirmed Biden’s replacement for Pompeo. As of Tuesday, Antony Blinken, Deputy Secretary of State under President Obama and step-son of a Holocaust survivor, is set to fill Pompeo’s shoes in the world of international diplomacy.

While Pompeo transitions from the White House Cabinet to the private sector, many are guessing what his further aspirations might be.

Some are questioning whether or not Mike Pompeo may even pursue a presidential run in 2024.

As an attorney, Congressman for six years, Director of the CIA, and the Secretary of State, Pompeo certainly has the resume for a presidential run.

Though his time in the public sector is over, for now, Mike Pompeo is sure to stay in the spotlight and most likely will be present in politics for several years to come.

The War On The Filibuster