AOC Fact Check: Trump Supporters Did Not Plant Bombs Around Her Office

This statement is false.

Her full tweet read, “This is the latest manipulative take on the right. They are manipulating the fact that most people don’t know the layout the Capitol complex. We were all on the Capitol complex – the attack wasn’t just on the dome. The bombs Trump supporters planted surrounded our offices too.”

The closest pipe bomb to AOC was placed outside the RNC headquarters.

This conflicts with AOC’s statement, which claimed that those involved in placing pipe bombs were Trump supporters. It seems unlikely that a Trump supporter would inflict damage on their party’s headquarters. 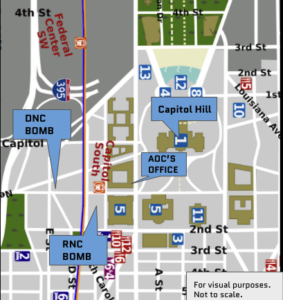 The Department of Homeland Security reports that a pipe bomb’s average blast radius calls for buildings within 70 feet to be evacuated.

Those not indoors are advised to evacuate outside 1,200 feet of the pipe bomb’s location. 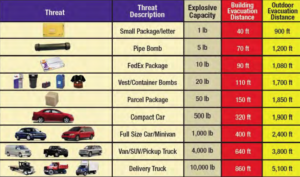 AOC’s office is located around 600-1,200 feet in physical distance away from the bomb’s location.

With several buildings in between AOC’s office and the bomb, it’s clear the evacuation of her office was not under threat of exploding but was a measure of extreme precaution.

Both bombs were found within one minute of each other, and the bomb found at the RNC was located by a 36-year-old woman doing laundry.

The young woman notified authorities immediately, and law enforcement showed up shortly after.

Law enforcement told CNN that it is still unclear on why the explosives never exploded during the Capitol chaos.

The pipe bombs were successfully detonated by law enforcement later on and were rendered safe by the FBI.

Officials are exploring a number of theories such as the bombs were a distraction, the timers were set incorrectly, the batteries malfunctioned or that the bombs were even faked.

Officials are still searching for the bombing suspect, despite having pictures of who they believe placed the two bombs.

The interesting thing about the suspect is that the bombs seem to have been placed before when the Capitol riots even began.

In fact, the FBI is now saying that the pipe bombs were placed the day before the riots on January 5, 2021.

Officials estimate the suspect placed the bombs in between 7:30 p.m. and 8:30 p.m. on the night before the insurrection.

This evidence completely contradicts AOC’s latest claim saying that it was apart of the Capitol riots.

The suspect was wearing no affiliated political gear and was covered from head to toe to hide their identity. 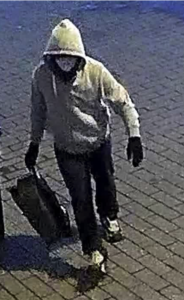 The suspect was wearing a face mask, grey hoodie, Nike Airmax and held a backpack in hand.

With this evidence, we can conclude that AOC’s claim that Trump supporters planted bombs around her office is false.

There has been zero substantial party affiliation of the suspect, nor has their identity been found. Therefore, there is no substance that this was a “Trump supporter” like AOC claimed.

The bombs were not surrounding AOC and her building but were placed in nearby areas. She was evacuated due to precautionary measures, but the explosives posed little to no threat to her.

AOC’s attempt to demonize an entire party ultimately falls flat. She lacks the hard evidence that would prove her claims.

You Won’t Believe What AOC Lied About…

What is Biden’s COVID-19 Plan?