A lawmaker from New York is putting forth legislation to ban the possession of bulletproof vests.

Jonathan Jacobson, a Democrat Assemblyman from New York, introduced bill A. 353 to amend a current law that bans body armor to criminals.

Jacobson’s bill would force New York residents to turn over their bulletproof vests to police.

Residents would have 15 days to turn in the body armor after the law would take effect.

The organization known as “Firearms Policy Coalition” is currently campaigning against bill A.353.

“A. 352 deprives New Yorkers of their right to passive defense by instituting a confiscatory ban on body armor,” the coalition said.

“A. 352 criminalizes the purchase and possession of body vests, which New York law defines as soft body armor that provides wearers with Level I or greater protection (the lowest common rating for body armor) intended to stop low kinetic energy rounds such as a .380,” the Firearms Policy Coalition continued and said.

The Assemblyman’s bill would additionally make owning or purchasing body armor “a Class A misdemeanor for a first offense and a Class E felony for each subsequent offense.”

Legal punishments for failing to follow this law could result in four years in prison.

Those whose jobs are determined by the Department of State to require bulletproof vests and other body armor would in fact be exempt from this law.

A copy of the proposed legislation can be found below. 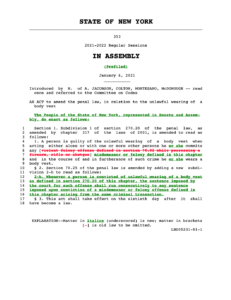 It’s unclear why the lawmaker would want to restrict the safety and self-protection of his constituents.

Gun violence is currently at record highs; legislation like this may result in only more deaths in the state.

ABC 7 New York reported that gun violence had increased dramatically in the past few years.

In just November of 2020, shootings increased by 112%, the news outlet reported.

The statistics are not available to show if bulletproof or protective could have saved any number of those lives.

Protective gear may have saved those who took fire to the chest or regions that a bulletproof vest could have stopped life-threatening wounds.

Under this kind of legislation, lives in the future that may be saved by protection could be threatened.

This bill is yet another fatal blow to the people of New York and their rights to self-protection.

California Rises Up Against Newsom

You Won’t Believe What AOC Lied About…