Over the past few weeks, since President Biden was inaugurated, there have constant calls for unity by all corners of the political spectrum.

Even during the Super Bowl, America watched as rockstar, Bruce Springsteen, filled a Jeep ad calling for the “ReUnited States.”

What wasn’t very unifying was what everyone saw before the game was even played.

Prior to the United States National Anthem, Alicia Keys sang her rendition of “Lift Every Voice and Sing,” which is widely referred to as the Black National Anthem. 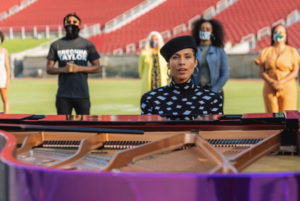 We have a national anthem in this country, and it’s called the “Star-Spangled Banner.”

Francis Scott Key wrote the song during Fort McHenry’s siege in 1814, and it has been the national anthem for almost a century since then.

When the left calls for a national anthem to appease one group of people by dividing Americans in song and then calls for unity, the irony is laughable.

Our national anthem is unifying; it represents all that is great about America, that is why it is the NATIONAL anthem.

Separating groups into different songs is quite literally segregation.

It wasn’t too long ago that the African American community was fighting to be included in sports and culture, and now America is just walking that back?

Below is a picture of the “Colored World Series,” a sad testament of the segregation that used take part in sports. These men fought patriotically to integrate into sports that sought talent, not race.

The national anthem applies to ALL Americans; it was never about any specific people group; it was about the freedom that our country gives and the endurance of that freedom.

It’s baffling that there has to be a national anthem for a specific group, that by definition that strips us away from the unity a NATIONAL anthem brings.

We are all Americans regardless of race, religion, or creed. Our forefathers jumped into the melting pot of America to pursue the American dream.

It was never about race or dividing patriotism. Our country is about the opportunity.

The beauty of the Star-Spangled Banner is it applies to everyone, and we cannot forget that freedom is an idea that must be fought for DAILY.

By separating anthems based on our skin color and not the freedom of ALL Americans, our country will only be more divided and less united.

Everything You Need to Know About The Impeachment…