During a diversity training seminar at Coca-Cola, employees were urged to be “less white.”

The course, entitled “Confronting Racism,” was offered by LinkedIn Education and Coca-Cola decided to use it for their diversity education.

A whistleblower leaked several presentation slides that detailed all of the incredibly offensive material that was being discussed.

“In the U.S. and other Western nations, white people are socialized to feel that they are inherently superior because they are white,” one of the slides said.

Other slides went as far as to tell workers to “try to be less white.”

An alleged photo of the slides can be found below. 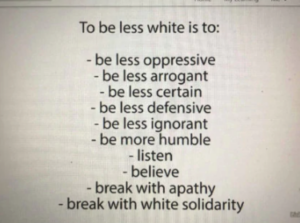 The presentation goes on to target white people because of the color of their skin rather than their actions.

Needless to say, this did not sit well with most Americans.

Graham Allen, the owner of this site and owner of Nine Twelve United, decided to fight back against this rhetoric that Coca-Cola.

On Tuesday, Nine Twelve United released a shirt entitled “Be More American” in a Coke-style font.

Graham Allen wearing the design can be found below. 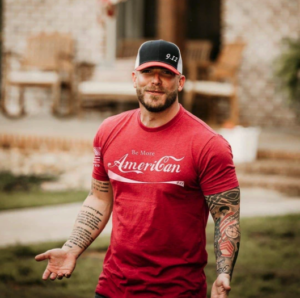 The shirt rose to popularity immediately and showed just how much distaste Americans have towards Coca-Cola’s “training.”

“The shirt isn’t about race; that’s the point. Instead of urging people to abandon their ethnicity, why can’t we just band together as Americans?” Graham Allen said.

“Martin Luther King Jr. never fought for this; he fought for everyone to be treated regardless of skin color. It would utterly disgust him to see people being urged to be less of their race; it’s literally racist,” Allen continued.

Since the leaked images surfaced, Coca-Cola has completely abandoned their connection to the presentation.

Coca-Cola told Newsweek that the courses were not mandatory; however, whistleblowers claim that it was.

“We will continue to listen to our employees and refine our learning programs as appropriate,” Coca-Cola said.

Even as Coca-Cola retracts their training, Americans are furious with that brand.

Some are even calling to boycott Coca-Cola and move to Pepsi products.

Meanwhile, everyday Americans are flocking to Nine Twelve United to wear a shirt that displays a pro-America message.

To purchase your “Be More American” shirt, click HERE.