After Facebook informed Nine Twelve United that their advertisements had been shut down, they retaliated in the best way possible. By giving back. 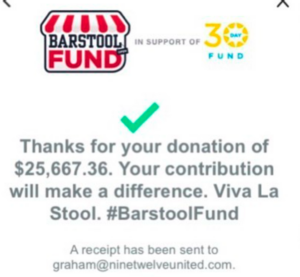 Facebook never truly told Nine Twelve United why they would block advertisements, but the company assumes it was due to their “Make Us” design.

The next day Graham Allen took to Fox News to announce that the company would distribute 25% of shirt profits to Dave Portnoy’s Barstool Fund. 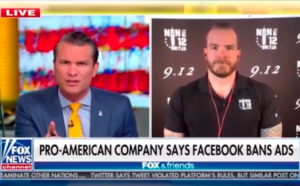 The Barstool Fund, founded at the height of the COVID-19 lockdowns, aims to help fund small businesses struggling to keep their lights on.

The Barstool Fund’s requirements for receiving funds are that the company is still paying its employees and that the companies were not struggling before the pandemic shutdown.

The small business aid can range anywhere from payroll to employees, rent, or even taxes.

“I think one of the beauties of this, I’ve said it a bunch, there’s so much crap in the world right now, with politics and everything else. This is a universal, sounds sappy, but pure cause. We don’t care about Democrats, Republicans, black, white, blue, purple, we’re just trying to help small businesses, and there really should be nobody in the world who is against what we’re trying to do. It should be something everyone can rally behind,” Dave Portnoy, the founder of Barstool Sports and the Barstool Fund, said.

The idea for the “Make Us” shirt design originated with a patriotic message to the government. The meaning intends to reflect the resistance towards over-reaching government power and how they cannot “make us” close businesses down.

“It was a no-brainer, the shirt is meant to stand up against the unconstitutional lockdowns, and there’s no better way to practice what we preach than to help businesses who need it most,” Graham Allen said, referring to their donation.

Graham Allen continued by saying, “We want to show our audience this isn’t about the money, this is about standing up for what we believe in … it’s our mission to unite our country, and we can’t do that without starting with the man in the mirror.”

Portnoy’s Barstool Fund has raised well over $34 million with 212,166 supporters as of Tuesday afternoon. 100% of all proceeds go to small businesses throughout our country. 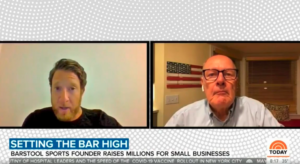 Since The Barstool Fund’s creation, more than 200 small businesses have been fully funded with assistance to help them survive through the government shutdowns.

To donate to The Barstool Fund, visit barstoolsports.com/the-barstool-fund.

To purchase Nine Twelve United’s “Make Us” design click the shop button in our menu, and 25% of that will go to The Barstool Fund.