This HUGE Trafficking Bust Happened During The Super Bowl…

Historically, the Super Bowl has served as a hub for human trafficking.

Human trafficking is a criminal activity in which people are recruited, harbored, transported, bought, or kidnapped to serve an exploitative purpose, such as sexual slavery, forced labor, or child soldiery.

This criminal practice many times is failed to be reported on large media outlets or is downplayed.

Big news outlets such as The Huffington Post have reported that human trafficking is a myth during Super Bowl time, but these recent arrests say the opposite.

According to The National Trafficking Hotline, Florida ranks third in the nation for human trafficking.

Dr. Christine Cauffield is one of the brave women at the forefront of fighting these horrors.

Watch Dr. Christine Cauffield’s take prior to the Super Bowl at the bottom of our page.

During Super Bowl week, a sting dubbed “Operation Game Over” resulted in the arrests of over 70 people in Tampa.

Among the victims saved was a 17-year-old girl who was being trafficked by two men, one of which is a 20 times convicted felon. 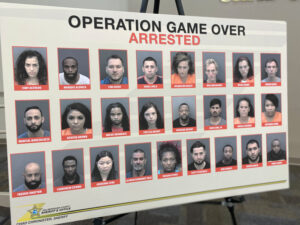 Hillsborough County Sherriff, Chad Chronister, said in a statement, “The sickening practice of human trafficking is a crime that is nothing less than modern day slavery … Escaping the wrath of a trafficker takes courage and in some cases, is nearly impossible. For this reason we have not and will not relent in our efforts to stop the demand and we are accomplishing this one arrest at a time.”

Human trafficking is a tremendous problem this nation faces but it is one that not many like to talk about.

People’s lives are consistently destroyed by this criminal practice, and it is equivalent to modern-day slavery.

The brave men and women who helped incriminate these villains deserve an infinite amount of praise.

Even if the mainstream media won’t report the heroic acts of these law enforcement officers, we will.

We will believe unearthing these horrors and shining light on the most depraved acts of humanity is a necessary act to keep Americans informed and driven to making our country a more perfect Union that we know and love.

To read more about our support of Law Enforcement officers, click HERE.

This App Just Got Resurrected…

PRISON FOR PELOSI?: House Speaker May Have Broken This Law…