WATCH: AOC Squad-Member Has A BREAK DOWN During Impeachment Vote

One of AOC’s “squad members,” Rashida Tlaib, had a full-on mental breakdown during the impeachment vote.

Congresswoman Tlaib represents the 13th district of Michigan, where she was a lawyer.

She is the first person of Palestinian descent to serve in Congress.

Tlaib is one of two Islamic women in U.S. Congress; the other is Ilhan Omar, a Democrat from Minnesota.

Both Omar and Tlaib are members of the infamous Alexandria Ocasio Cortez’ squad.

The group represents a radical and progressive movement in the Democrats’ left-wing agenda.

Like others in the squad, Tlaib is a member of the Democratic Socialists of America.

Tlaib is also a famous critic of Donald Trump and the country of Israel.

Rashida Tlaib is known for making comments that many find “anti-semitic.”

The congresswoman openly supports the BDS (Boycott Divestment Sanctions) movement, which seeks to choke out all imports and exports from the American ally, Israel.

As a member of Islam, Tlaib has recognized that many people in her religion do not believe she is “Muslim enough.”

Even in her testimony to Congress, she thanks “Allah” for her safety.

Tlaib said in previous statements that she believes she is “doing things that I think are reflective of Islam.”

In her testimony, Rashida Tlaib brings up multiple instances of times she received death threats.

Of course, her speech intends to target and demonize former President Trump for the riots on January the 6th.

As seen in the video, Congresswoman Ocasio-Cortez comes up to bring her comfort. 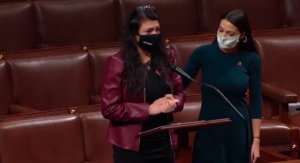 To read our fact checks for Ocasio-Cortez, click HERE.

This App Just Got Resurrected…