When Lauren Boebert swore into the House of Representatives as a Republican from Colorado, she wasn’t messing around.

Boebert swore to defend the Constitution, and that’s precisely what she is doing.

On Thursday, a Democrat in California called out Boebert for having guns in her office’s background.

U.S. Representative Jared Huffman said that Boebert had a “gun fetish” because of the firearms in her office.

On Fox News, the Congresswoman responded by saying that Huffman was an absolute “creep” for making those comments.

Boebert went on to say that his comments displayed “disdain for the Constitution.”

“Rather than having a productive debate about policy … Democrats were too busy mocking the Constitution and disrespecting the everyday Americans that I was elected to represent,” Boebert said to the Fox News host.

Another Democrat from California made posted this on Twitter: 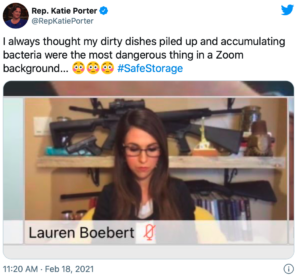 Boebert clapped back and said, “It’s kind of alarming that she has so many dishes in her sink collecting bacteria … Do your dishes, Hon.”

Yikes, don’t mess with her!

Congresswoman Boebert decided to put firearms in her Zoom background in response to the House Committee on Natural Resources’ stance and banning firearms.

“This was my first committee hearing, and the chairman couldn’t stop attacking, degrading, and insulting committee members,” she said.

“I am busy fighting against the left’s real fetish for power and stripping Americans of their constitutional rights,” Boebert responded.

“If somebody wants to have a shrine to their gun fetish as a Zoom backdrop in their private life, they can do that,” Huffman said during the Committee hearings.

“But this is our ‘hearing room,’ and at some point, we will get past the COVID epidemic, and we’ll all start showing up in person, and our safety and our ability to conduct business civilly without feeling threatened is a relevant consideration, unfortunately,” Huffman finished.

Those weren’t Huffman’s only words that day; in fact, he also posted this on Twitter: 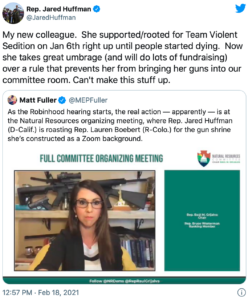 Even as the left mocked the freshman Congresswoman, she stood her ground.

“We all took an oath to uphold and secure the Constitution, every single one of us,” she pointed out.

“How about the Nineteenth Amendment? Can women vote in this committee?” Boebert asked.

“Why does anyone think that they can cherry-pick the Second Amendment and say this is the one enumerated right that we can take away from people?”

“Why stop with the Second Amendment?” Boebert pressed on.

“Let’s go ahead and quarter soldiers in this committee room. There’s plenty of soldiers in the parking garage at ‘Fort Pelosi’ in Washington, D.C.”

Most politicians barely have the guts to stand up for their constituents.

Lauren Boebert just stood up to the whole swamp.

It’s this kind of courage and strong-willed mentality that Americans like to see.

It’s only Boebert’s first few months in Congress, so there’s bound to be a lot more to come.

Watch the full video below.

THE CRIMES OF CUOMO: FBI Investigates…

Donald Trump HINTS At His Next YUGE Move…